Astrid Munday  – Beauty In The Ordinary 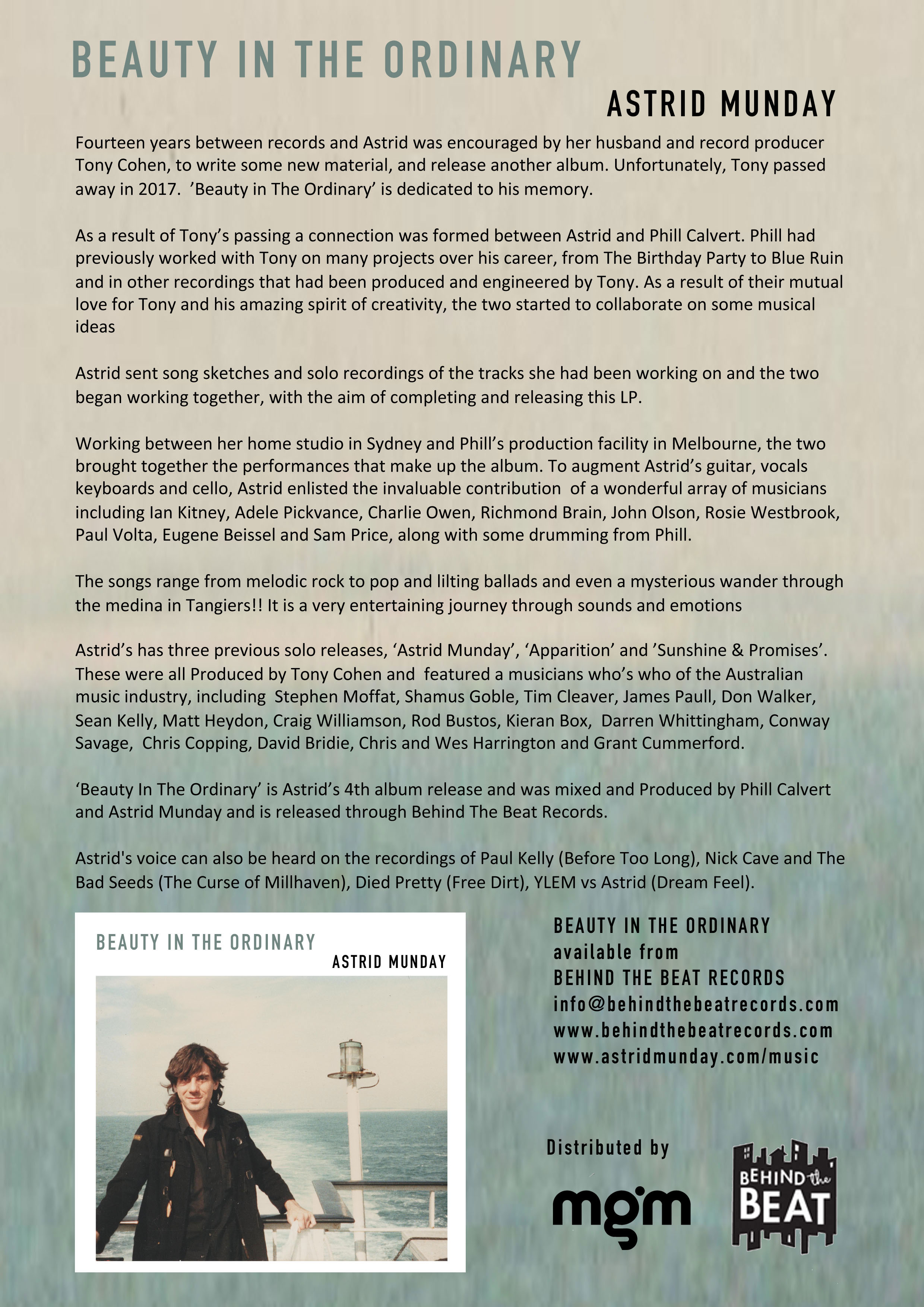 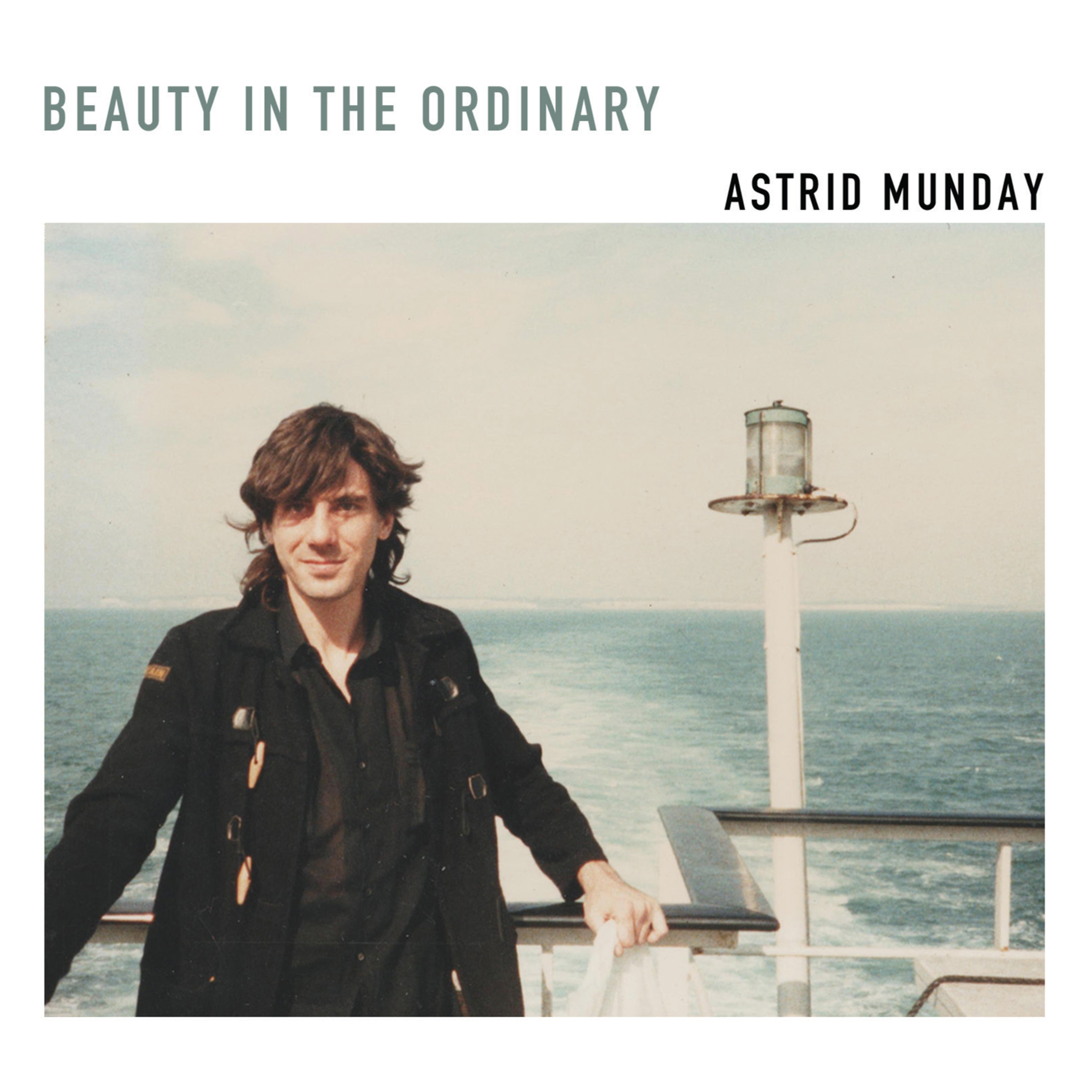 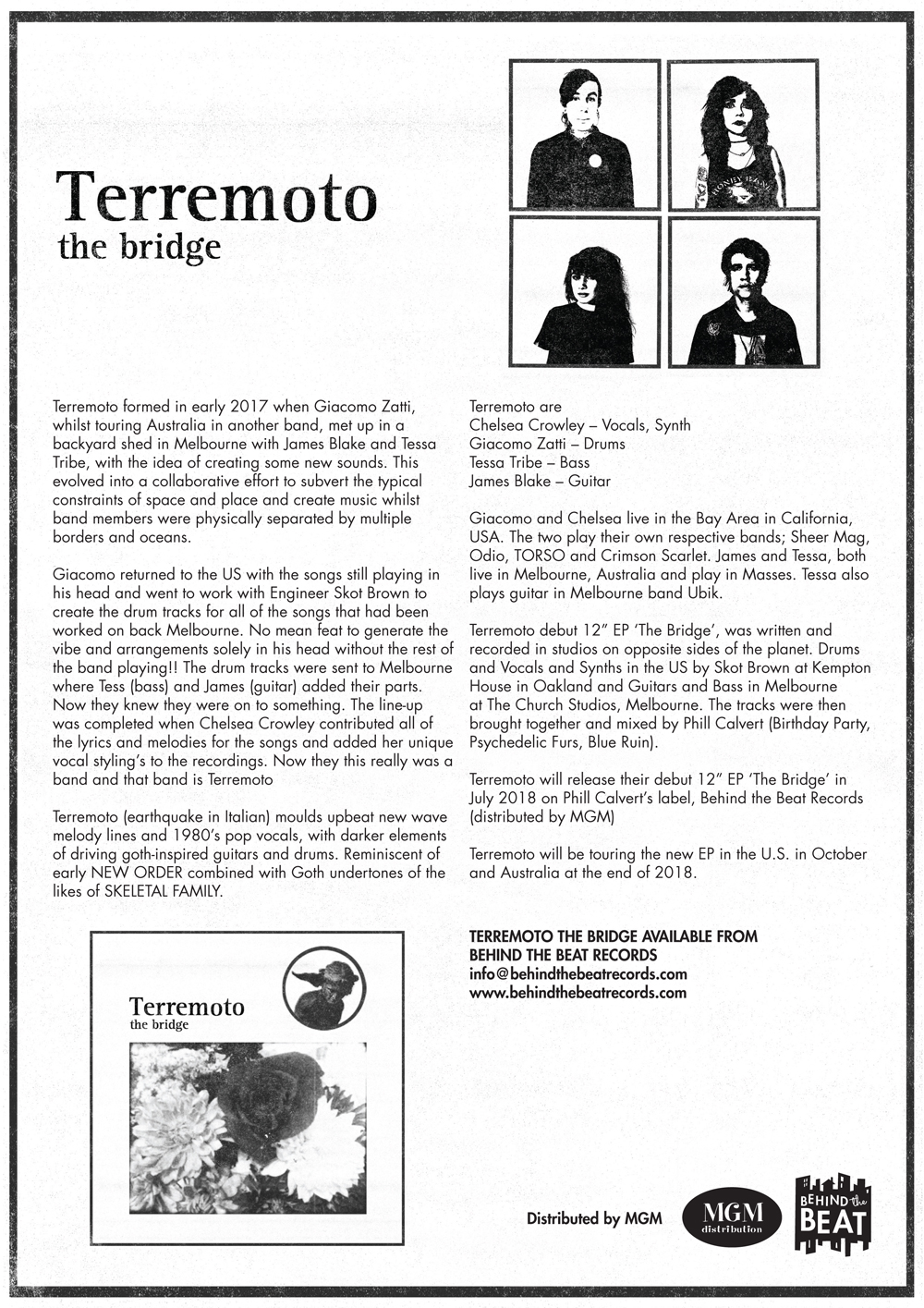 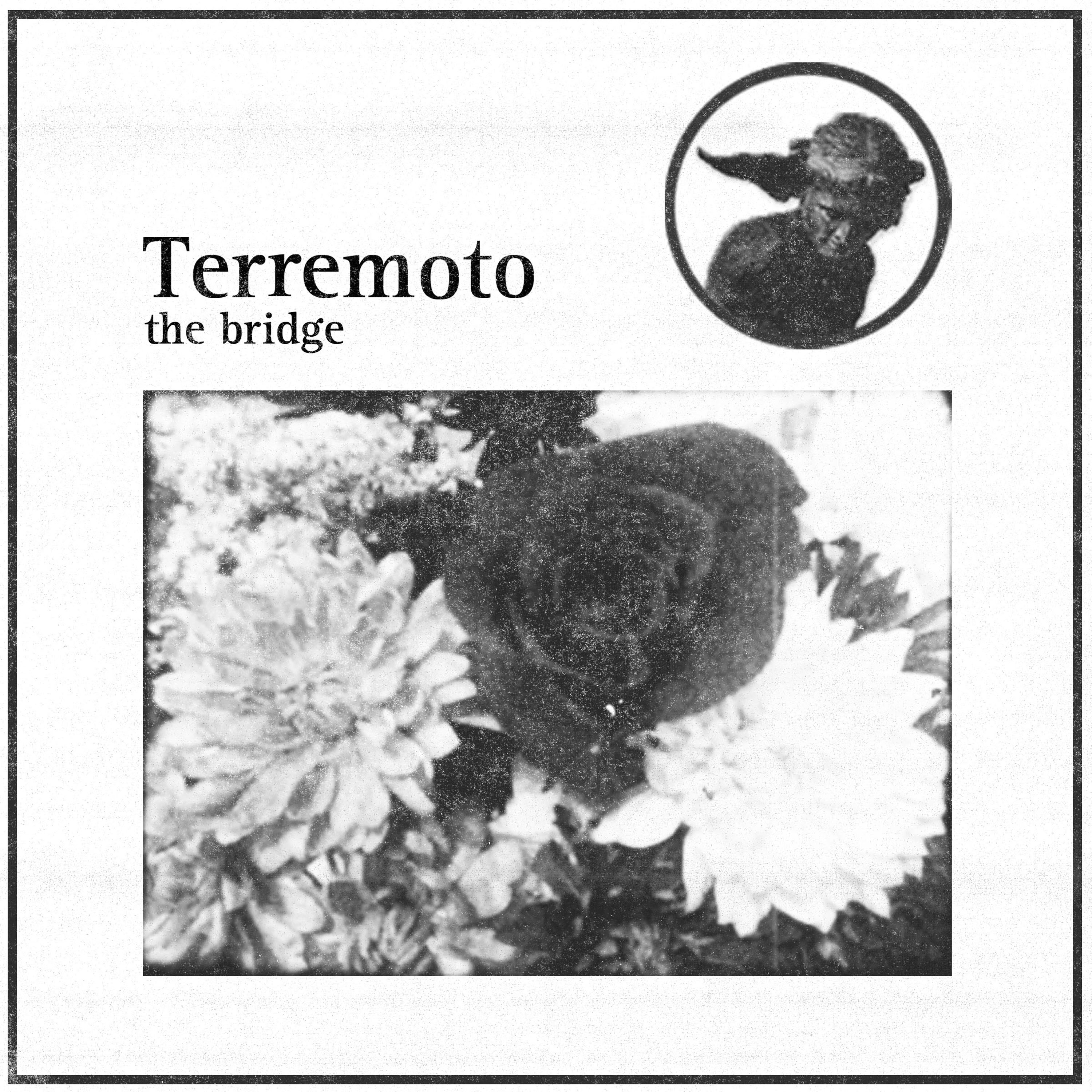 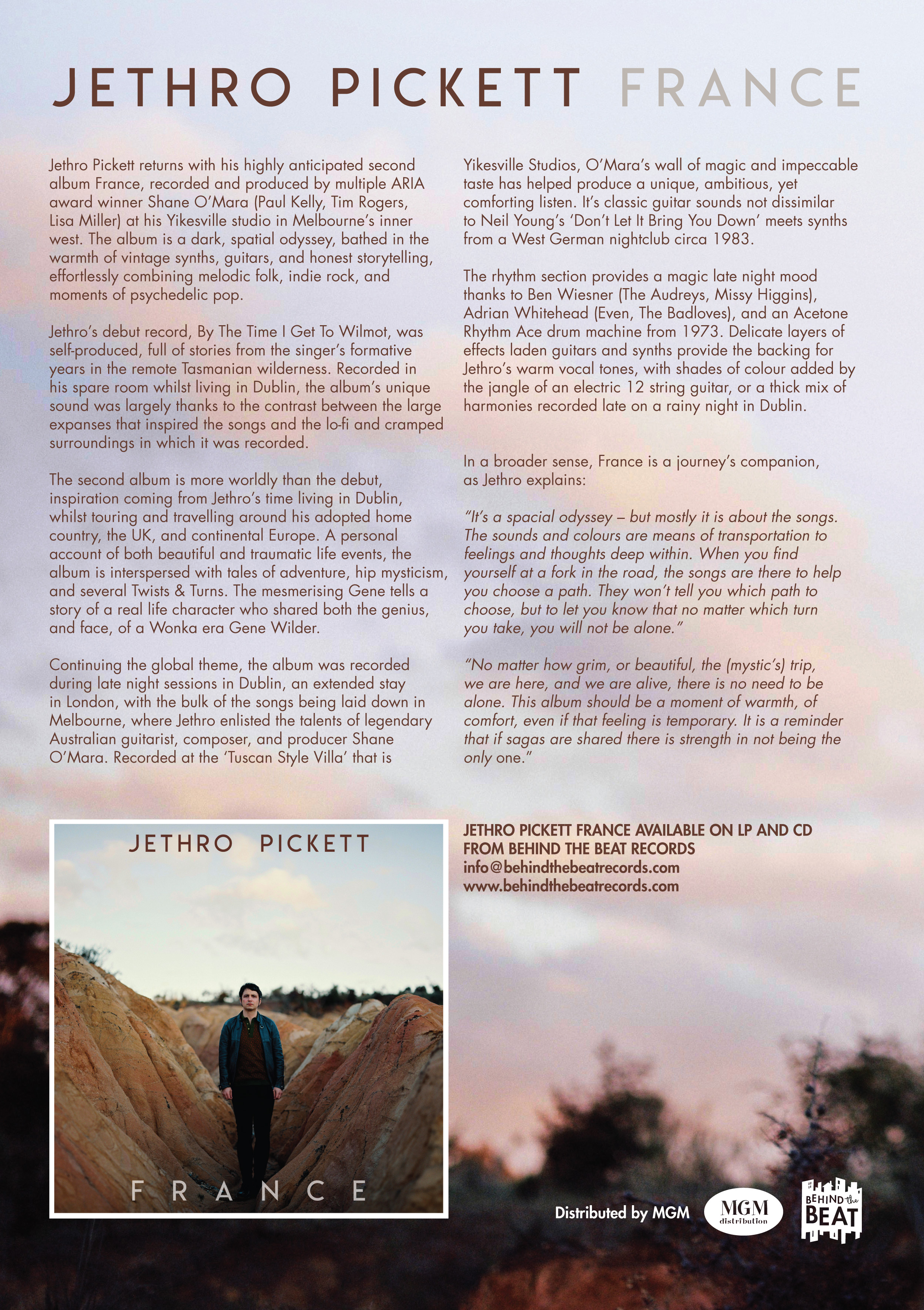 Jethro’s debut record, By The Time I Get To Wilmot, was self-produced, full of stories from the singer’s formative years in the remote Tasmanian wilderness. Recorded in his spare room whilst living in Dublin, the album’s unique sound was largely thanks to the contrast between the large expanses that inspired the songs and the lo-fi and cramped surroundings in which it was recorded.

The second album is more worldly than the debut, inspiration coming from Jethro’s time living in Dublin, whilst touring and travelling around his adopted home country, the UK, and continental Europe. A personal account of both beautiful and traumatic life events, the album is interspersed with tales of adventure, hip mysticism, and several Twists & Turns. The mesmerising Gene tells a story of a real life character who shared both the genius, and face, of a Wonka era Gene Wilder.

Continuing the global theme, the album was recorded during late night sessions in Dublin, an extended stay in London, with the bulk of the songs being laid down in Melbourne, where Jethro enlisted the talents of legendary Australian guitarist, composer, and producer Shane O’Mara. Recorded at the ‘Tuscan Style Villa’ that is Yikesville Studios, O’Mara’s wall of magic and impeccable taste has helped produce a unique, ambitious, yet comforting listen. It’s classic guitar sounds not dissimilar to Neil Young’s ‘Don’t Let It Bring You Down’ meets synths from a West German nightclub circa 1983.

The rhythm section provides a magic late night mood thanks to Ben Wiesner (The Audreys, Missy Higgins), Adrian Whitehead (Even, The Badloves), and an Acetone Rhythm Ace drum machine from 1973. Delicate layers of effects laden guitars and synths provide the backing for Jethro’s warm vocal tones, with shades of colour added by the jangle of an electric 12 string guitar, or a thick mix of harmonies recorded late on a rainy night in Dublin.

In a broader sense, France is a journey’s companion, as Jethro explains:

“It’s a spacial odyssey – but mostly it is about the songs. The sounds and colours are means of transportation to feelings and thoughts deep within. When you find yourself at a fork in the road, the songs are there to help you choose a path. It won’t tell you which path to choose, but to let you know that no matter turn you take, you will not be alone.”

“No matter how grim, or beautiful, the (mystic’s) trip, we are here, and we are alive, there is no need to be alone. This album should be a moment of warmth, of comfort, even if that feeling is temporary. It is a reminder that if sagas are shared there is strength in not being the only one.” 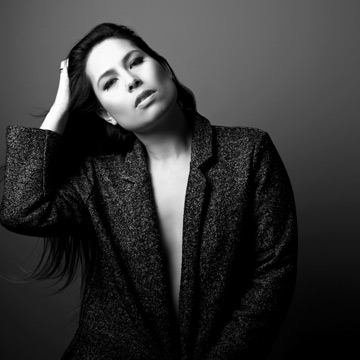 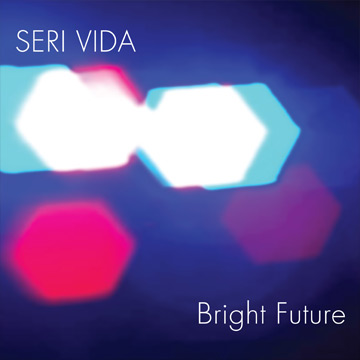 The 3rd release from Melbourne chanteuse Seri Vida is a selection of stories from real life: love, liquor, laundry and legal troubles.

Drawing from her own experiences and the stories she sees around her, Seri is exploring new song writing territory, while holding true to her indie roots with plenty of crashing guitars and drums.

The EP starts as the big rock sounds of the title track “Bright Future” comes blasting out with contagious energy.

Next up “Bullet” a pumping tale of  always finding yourself going over old ground, when looking for love.

“Looks Could Kill” is virtually the flip-side of the track before. Next a trip to the “Laundromat” takes you to another place in Seri’s musical pallet.  The EP concludes with “Time Along” co-written with long time guitarist Ben Ling. A languid ballad that leans a little to the left of alt country… or maybe not!

With this release Seri wants to take you on a journey… Why not go along for the ride.

Deliverance is the third album by Witch Hats.

Their first entirely self-produced and recorded release, Deliverance was created in Melbourne at: Phaedra Studios (Coburg), A Secret Location (Fairfield) with additional recording and mixing completed at One Seasons (Brunswick).

Capturing raw, first hand warts and all performances, the band drew inspiration from Neil Young’s ‘ditch trilogy’ whilst further exploring the feral and passionate mixture of punk, rock, noise and pop that’s littered their past releases. 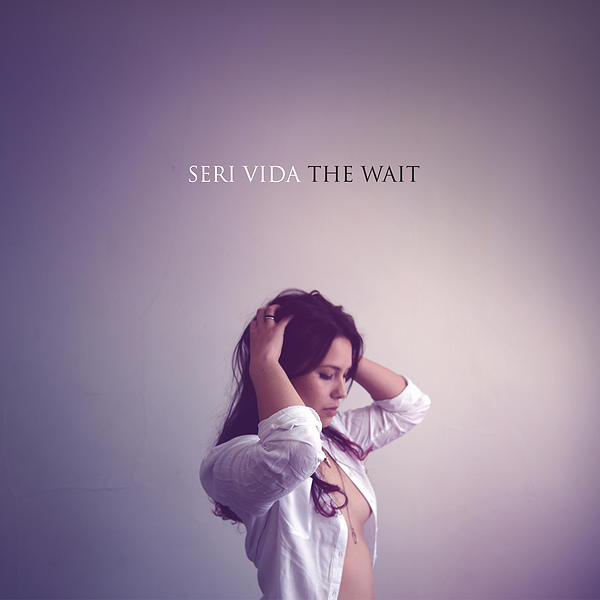 Here East meets West … and nothing is as it seems.

Emotion stripped bare…… Should I be allowed this close….inside the person?

Seri tells us all, that she has been there, but that it’s OK to cry and even better still to laugh.

There’s a depth and a maturity to the writing that balances ever so delicately with fragility. You feel that it could go either way at any moment.

This is a recording, a collection of songs that is going to touch you, to make you think, to make you feel. This (to me) is what music is all about. The artist takes you on a ride. Sometimes funny; other times scary, or sad. Even when you think you want to get off, you can’t. You just have to hang on….just so you can find out how it ends….or what happens next.

The only way to truly get inside this artist or these songs, is to listen!!

Listen in a happy place / listen in the car / Play it on a sunny day with all the windows open / Play it at night alone, with just your thoughts.

I feel privileged to be a part of making this record with Seri. In truth I am just a facilitator. All of this just pours out of her.

Enjoy the record. Enjoy the ride. This is just the beginning

Phill Calvert – Behind the Beat Records

The music of this record ……in her own words

I guess I grew up on Joni Mitchell, Aretha, Dusty and Ella then was a 90s kid getting into PJ and Nirvana as well as those angsty singer song writers like Ani Di Franco and Tori Amos.

I find it hard to describe the sound now… I guess it’s confessional and personal alternative rock with pretty moments and aspects of grunge and folk woven in.

I’m not that good at writing about that stuff. I always hope that listening broadly will help create something “new sounding” but of course when / if it does happen, I don’t know what to call it.